If you are like most of us, you have more than a few cabinets and storage areas that are crowded, disorganized and most likely spilling out into other areas of the home. Our supply closets, laundry rooms and under sink areas are often the places most affected by this problem.

These areas are where we stash the cleansers, detergents and the latest wonder products that are marketed to us as being the cleaning product we just cannot live without. Overtime, these household cleaners not only take up space and create clutter, they also can compromise the health of the people and pets living in the home. 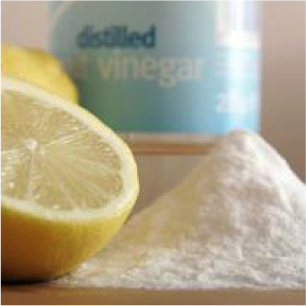 Replacing the Many with a Well-Chosen Few

The good news, however, is that it is actually possible to replace those dozens of bottles and aerosol cans with just a handful of safe, non-toxic products. Using these all natural ingredients will save you money and space, as well as leave your home just as clean and fresh as all those cans and bottles of harsh chemicals did. Minimizing the consumption of conventional cleaners will also positively impact the environment.

Here is a quick list of five natural cleaning alternatives to get you started on the route to a cleaner and more organized supply area, as well as a safer home for you and your family.

Americans are exposed to phosphates in many forms each day. They are found in paints, polishes and coatings, pharmaceuticals, hygiene products, flame-retardants and even in some common foods, such as ham and shrimp. In addition, they are found in many dishwashing and laundry detergents, as well as other various cleaning applications.

Phosphates are chemical compounds containing phosphorus – a common and naturally occurring mineral. Phosphorous is used in a wide variety of manufacturing processes including those that produce household matches, fertilizers, water softeners, some types of steel and even baking powders and fine china. 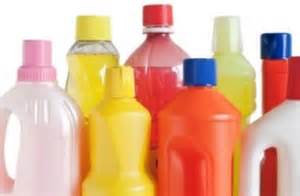 Although there are many types of phosphates, some are primarily used in cleaning. These include:

Dishwashing detergents commonly contain the most common type of phosphates, known as sodium tripolyphosphate or STPP. This type helps soften hard water, dissolve grease and oil and prevent the build-up of residue in automatic dishwashers that causes water spots and an oily film to remain on dishes after the cleaning cycle completes.

Phosphates were also once commonly found in laundry detergents, until many states banned their usage in the 1990s. This ban and others that are currently being discussed are necessary to prevent water quality issues and environmental effects, such as explosive algae growth and the subsequent fish kills that result from insufficient oxygen.

Even though phosphates can deliver certain cleaning benefits, especially in industrial applications, they are now known to be a possible cause of health issues for the people who use them. Some housekeeping employees who used cleaning products containing phosphates have noted skin problems, such as rashes, along with dizziness, breathing difficulties and other complaints.

Avoiding Phosphates in the Home

As the problems with phosphate usage becomes more widely known, many families are taking voluntary steps to do away with phosphate usage in their homes. This process can be as easy as reading the labels to determine what products still contain phosphates, and which do not. Pay particular attention to all types of detergents, especially in states that have not yet banned the sale of products that contain phosphates.

Specialty cleaning products, such as those designed to remove soap scum, hard water spots and lime scale should also be approached with caution. Many of these products use phosphates because they soften water and help dissolve the residue left by the mineral content of the hard water.

An Effective Substitute for Phosphate Laden Cleaners in the Home

Vinegar is an efficient and very inexpensive substitute for the phosphate-laden chemicals that are marketed for this purpose. Common household vinegar safely removes the scale from clogged coffeepots and showerheads and dissolves soap scum and hard water deposits from faucets, tile and porcelain surfaces. Regular cleaning and soaking with vinegar is even effective for notoriously difficult cleaning tasks, such as toilet bowels and shower doors.

Chlorine-based bleaches are commonly found in many household cleaning products that are used to whiten laundry, sanitize surfaces and eliminate mold and mildew. While its disinfecting properties may seem to contribute to a healthier indoor environment, this chemical is harmful to human health and the planet. Before you open that next bottle of bleach, it is important to understand just how hazardous it can be.

Some of the health hazards of chlorine bleach are mild and can include watery eyes, skin irritation and breathing problems – coughing, wheezing, chest tightness and shortness of breath. Many people may have experienced these effects at some point while cleaning in enclosed spaces and poorly ventilated areas, such as bathrooms. However, while these symptoms typically go away after a thorough flushing with water, the exposure to chlorine may have long-term effects. Studies now suggest that adverse health affects are often found in individuals continuously exposed to chlorine bleach through inhalation and skin absorption. 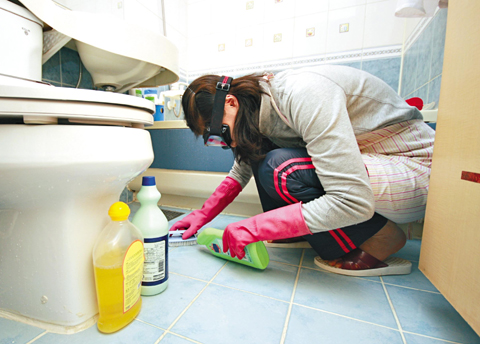 Mixing Household Bleach and Other Products Can be Lethal

Many household cleaners contain chlorine bleach to help kill bacteria, eliminate stains and remove grime from various home surfaces. While moderate symptoms include irritation to the eyes, skin and lungs, there are far more serious consequences, such as fluid in the lungs (pulmonary edema). When mixed with other products, either intentionally or accidentally, the chlorine emits a poisonous gas that when inhaled, can cause neurological problems and potential death. Consumers who are unaware of this may add bleach to a toilet bowl after adding another cleaner; inadvertently creating highly toxic fumes. Mixing bleach with ammonia, drain cleaners or scouring powder, as well as with natural acidic cleaners like vinegar can also be dangerous.

Household cleaners are not the only problem; it is also washing machines and dishwashers. As many dishwashing detergents and laundry products contain chlorine, when these devices are turned on the chlorine becomes airborne in a process called volatilization. Those in the household then breathe in the chlorine-contaminated air. Scented laundry bleach is particularly dangerous, because it makes the scent of chlorine pleasant, which can disguise the harmful health effects.

Industrial bleaching agents also have serious environmental impacts. Once the compounds reach water, chlorine reacts with other minerals and elements to form an array of dangerous toxins, such as dioxin. Theses toxins linger in our eco-systems, are extremely harmful to aquatic and wildlife, as well as takes years to dissipate.

Protect yourself and family from the health hazardous of bleach by switching to less corrosive materials. You will be surprised at how well you can tackle cleaning chores with common ingredients, like vinegar and baking soda, found in your cupboard. Hydrogen peroxide is also a great whitening alternative due to its oxidization properties. Not only are these products safe for human health and the environment, but they are cost effective too!